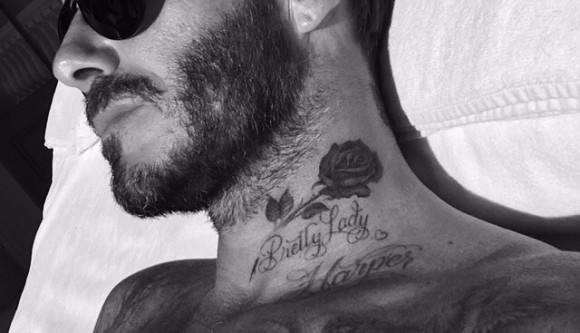 David Beckham apparently didn’t feel that his “Pretty Lady” neck tattoo did his love for daughter, Harper, justice, because the soccer phenom and ink lover has added a new rose tattoo to his neck, just above the “Pretty Lady” and “Harper” ink that was already there. David’s wife, former Spice Girl and fashion maven, Victoria Beckham, revealed the proud papa’s new tattoo on Instagram on October 23, captioning the black and white snap, “Happy Friday x kisses from Los Angeles x.” David Beckham’s tattoo is located on the left side of his neck and features a pretty rose inked just below the hairline where his beard begins.

The Beckham family is currently splitting time between their home in London and Los Angeles, where the six-some is enjoying a well-earned break after purchasing their latest home in the Costwolds, and which is where David was when he first debuted his rose neck tattoo. According to reports, David made the final decision to buy the lavish home in England when he found out the name of the local pub was “The Golden Ball,” an almost exact match for the footballer’s nickname – Goldenballs. The Beckhams appear to be soaking up the sun and getting in some family time during their stay in Los Angeles, and we are thrilled to see that David also made time to hit up a tattoo shop.

David himself hasn’t revealed the meaning behind his new rose tattoo, but based on his more recent ink, we’re guessing the tat has some sentimental meaning, possibly as another tribute to his only daughter, Harper, whom he jokes is his Rapunzel. While rumors have been swirling that Victoria plans to remove her many tattoos dedicated to her husband, David has been systematically adding sentimental new tattoos to his collection, and over the past several months has gotten a “99” tattoo on his pinky commemorating the year he and Victoria were married, a “Pretty Lady” tattoo on his neck for Harper, and a “Buster” tat on the other side of his neck for his eldest son, Brooklyn.

Some of the more common meanings of a rose tattoo include beauty, love, balance, spirituality and youth – all the things we would imagine a father would want for his young daughter. What do you believe is the meaning behind David Beckham’s rose tattoo?