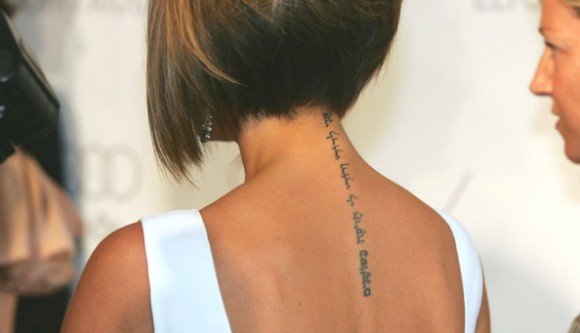 It’s apparently the time of year for removing tattoos dedicated to the people you love the most, because just one week after Khloe Kardashian shared a video of a laser treatment session to remove her back tattoo tribute to her late father, Victoria Beckham was spotted with a Hebrew neck tattoo inked in honor of husband David that was significantly faded. No doubt Victoria’s tattoo removal has spurred rumors that there is trouble in paradise for the Beckham clan, but the truth of the matter is, Victoria is removing her tattoos in an effort to be taken more seriously in the fashion industry. David Beckham, on the other hand, seems to do better in the modeling world the more tattoos he gets!

Victoria Beckham’s iconic neck tattoo is a Hebrew phrase that reads “I am my beloved’s and my beloved is mine,” and is inked in a vertical line down her spine, from the base of her neck to her upper back, between her shoulder blades. Formerly bold and easily detectable, Victoria Beckham’s tattoo was almost non-existent when the former Spice Girls singer was spotted at her runway show for New York Fashion Week on September 14. Even as Victoria works to remove her neck tattoo tribute to her husband, David continues to go under the needle for tattoos dedicated to his loving wife, debuting a “99” tattoo on his pinky finger earlier this summer, to commemorate the year the two were married.

Her neck tattoo removal has grabbed headlines recently, but this actually isn’t the first tattoo Victoria Beckham has had lasered off recently. The 41-year-old mother of four has been systematically removing the various tattoos she had inked in honor of her marriage to David, including two wrist tattoos signifying the date the couple renewed their vows in 2006, and the Latin phrase “again from the start,” which she got when the Beckham family moved to America so David could play for the L.A. Galaxy in 2007. Victoria Beckham rocks a number of other tattoos, including a piece featuring five stars on her lower back, which represent herself, David, and their three sons, Brooklyn, Romeo and Cruz. Think she’ll remove that one too??