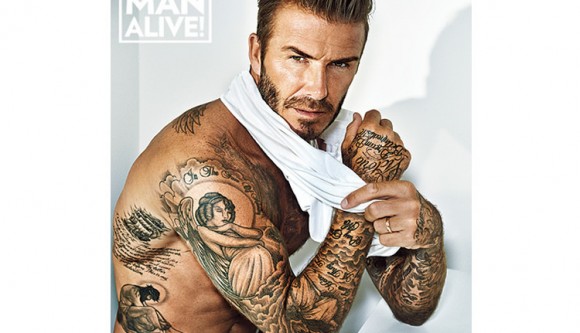 People magazine has crowned David Beckham 2015’s Sexiest Man Alive, and for those of you worried that the model and football icon’s 40-plus tattoos may not look so sexy when he gets older, he’s here to tell you that he’s not worried about it. During his cover interview with People magazine, David Beckham explained the meaning behind five of his tattoos, including the angel on his right shoulder, the massive guardian angel tattoo on his back, the “Dream big, be unrealistic” tattoo on his hand, the quote tattoo on his right forearm, and the Man of Sorrows tattoo on his side. Here are David’s explanations for those five tattoos:

Angel Tattoo on Right Bicep/Shoulder: A biblical reference featuring the motto “In the face of adversity,” which reminds David of his wife, Victoria, and the rest of his family.

Guardian Angel Tattoo on Back: After his son, Brooklyn, was born in 1999, David got his name inked on his lower back. He also has the name of his other sons, Romeo and Cruz, bracketing a large tattoo of a guardian angel in the middle of his back.

Quote Tattoo on Right Forearm: On the outside of his right forearm, David has a tattoo featuring a quote from the Roman emperor Caligula, which reads, “Let them hate as long as they fear.”

Man of Sorrows Tattoo on Right Side: When his grandfather, Joe West, passed away in 2009, David honored him with a tattoo inspired by artist Matthew R. Brooks’ Man of Sorrows painting.

These are just a few of David Beckham’s tattoos of course – he has more than 40 – and, while he chose to keep the meaning behind his other 30-something tattoos private during the People magazine interview, he did say that he often gets asked, “When you’re 60, how is it gonna look?” To which David responds, “I’m not even worried about it.” To be honest, we aren’t worried about it either…I mean, have you seen David Beckham?? If you’re interested in finding out more about the rest of David’s tattoos, and the meaning behind then, check them out here!