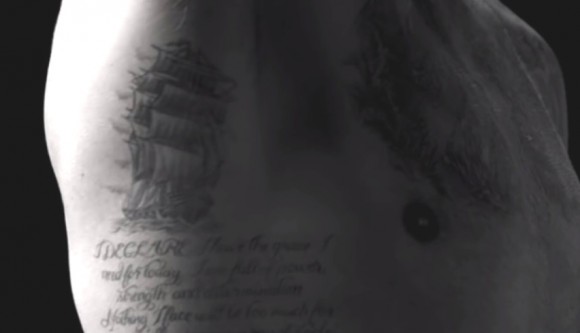 David Beckham’s eldest son, Brooklyn, has talked about getting tattooed like his daddy pretty much since he could first speak, and apparently, this love for permanent ink runs in the family, because David Beckham recently revealed that he has a matching tattoo with his own father. In a new commercial for his anti-aging face cream collaboration with skincare brand Biotherm Homme, Beckham talks about his impressive collection of tattoos, revealing the meaning behind each piece, including the ship tattoo he shares with his dad.

David Beckham’s matching tattoo with his dad is inked on his right side, just below his armpit, and features what appears to be an old-school ship, full sails and all. In the Biotherm Homme commercial, David reveals that the ship tattoo is one of his favorite pieces, and that his father has the very same piece inked on his arm. As David said, “I’ve always looked at [the ship tattoo] and thought one day, I’m gonna have that. I showed it to my dad and I could see he was quite proud, but he turned round to me and said, ‘Why did you have that done?’ But for me, it’s special.” As David Beckham has said in the past, his tattoos are “about the important people in my life, who I want to have with me always,” and the new ship tattoo on his side is no exception. The ink is a tribute to his father, David Edward Alan Beckham (Ted), who has played an important role in David’s life. Although they have had their differences in the past, due in large part to Ted’s split from David’s mother, Sandra, in 2002, the two are now close, and apparently have a lot in common, including their short tempers. In his 2000 memoir, Beckham: My World, the model wrote about his father, “If something is said about me, he’ll want to punch whoever said it, but if my mum hears it she’ll just want to cry. The quality I like least in myself is my short temper. I think I get it from my dad.” This new ship tattoo was inked on David Beckham’s side above the Man of Sorrows tattoo tribute to his grandfather, Joe West, who passed away in 2009, and above a previously unknown tattoo of what appears to be a passage from the Bible, and which takes up a large portion of his right ribcage. Beckham already has more than 40 tattoos covering his body, and if he could go back in time and start all over again, he apparently wouldn’t change a thing. “I don’t regret any of [my tattoos],” he says. “They all have a meaning. I think that’s what’s important about tattoos, if they have a meaning you’ll never regret them.”