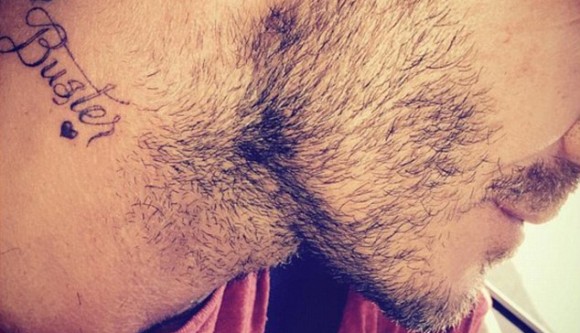 David Beckham must be in the new-tattoo kind of mood these days, because he just got a brand-new “Buster” tattoo on his neck, just one month after adding a new “99” pinkie tattoo and “Pretty Lady” neck tattoo to his already extensive collection of ink. David Beckham’s tattoo is inked on the right side of his neck, opposite the “Pretty Lady” tattoo he had done in honor of his daughter, Harper, and features the name “Buster” inked in an elegant black script font, with a tiny heart inked below it. David Beckham’s “Buster” tattoo matches almost perfectly the soccer icon’s “Pretty Lady” tattoo for Harper, right down to the sweet little love heart.

On August 30, David Beckham took to Instagram to show off his new neck tattoo, captioning the close-up snap: “I’ve always called Brooklyn (Buster) since the day he was born…Love you Bust @brooklynbeckham.” Brooklyn is the eldest son of David and Victoria Beckham, and has already been memorialized in a number of David Beckham’s tattoos, including a Gothic “Brooklyn” tattoo on David’s lower back, a Jesus and cherubs tattoo on his chest, and a tattoo of two cherubs on David’s right bicep. Brooklyn just turned 16 this past March, and the older brother to Romeo, Cruz and Harper has already shown an interest in getting some tattoos of his own, but for now, he’ll have to be content with being the inspiration for his father’s ink.

David and Victoria are obviously incredibly loving parents to their four kids, and the two have shared some seriously sweet moments on their Instagram pages recently. Alongside an adorable photo of David Beckham planting a kiss on the side of Brooklyn’s head, posted on Instagram last week, the proud papa wrote, “Something tells me I love this not so little man so much…Growing up fast into a perfect gentleman and hiking buddy…I love you big boy.” And apparently the love is mutual, because Brooklyn posted the same photo to his Instagram account with the caption, “Like father like son.” How stinking cute are these two??